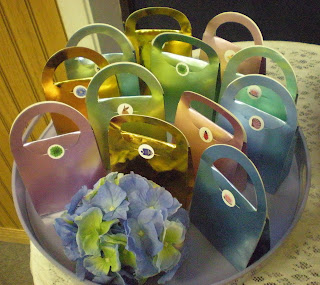 Eleven months after a young couple in our church got hitched, we are hosting a baby shower for their little one.
JaPo (again with the secret name to protect their identity), is a dear sweet baby and momma JePo has settled right into motherhood. 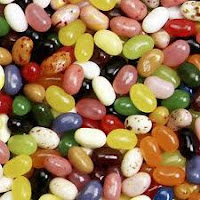 I don't have too many pictures, but wanted to share a few.
These little gift boxes were given as prizes to the games, as well as thank you's for those who helped with the shower.
We stuffed a 3"x4" zip locked bag with Jelly Bellies and put them into the decorative candy boxes.  Although we have done this before at church, Jelly Bellies always seem to be a hit. 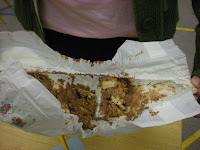 One of the games that a select few were asked to participate in was IDENTIFY THE CHOCOLATE BAR.
A simple enough game, except the chocolate bars were melted and then smeared into little, teeny, tiny infant diapers.
It really looked like ... well you know! 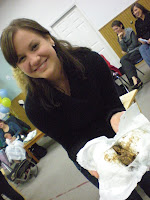 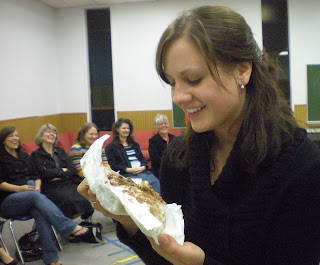 Dreamer was one of the chosen few, and really got into the bizarre fun of the game.

Most spectators laughed along as the contestants examined, smelled, and even tasted the diaper contents.

There were only a few that just couldn't stomach the thought.
Happily no one had to run out of the room!
Posted by Lori at 9:57 AM