Last night Hubby and I removed EVERYTHING out of the Butler's Pantry. For such a small room (about 6' by 6') we were shocked how much stuff was actually in there. 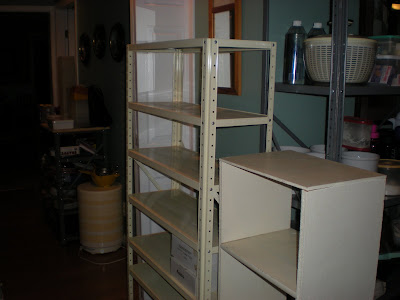 It now overflows down the hallway, into the kitchen and some even ended up in the foyer. The mess that this has produced only presses us onward to complete the task ... sooner than later. 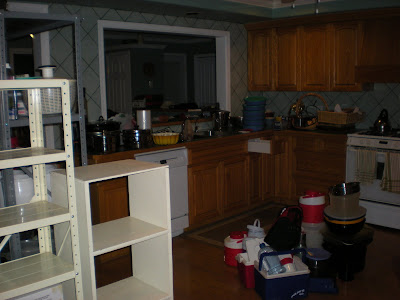 Inside the room we first removed all built-in shelving that hubby had quickly installed 14 years ago. Back then we were completely renovating the entire house, so money was even tighter then than it is now. He used old bi-fold doors to make shelves along the back wall. They served their purpose over the years, but they were ugggg-lee. 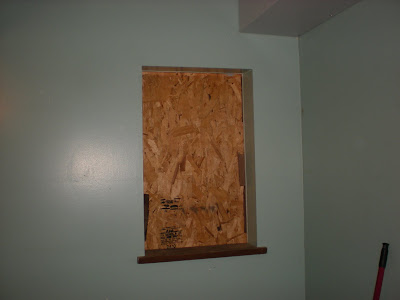 One thing that was neglected in the past renovation was to wall off a window to the outside. You see our Butler's Pantry used to be the bathroom. Thus a window was in the room. When we moved the bathroom down the hall, this room became the Butler's Pantry. Probably a last minute decision. The window was simply boarded off and actually with all the shelves of stuff in there, I hardly noticed the plywood. 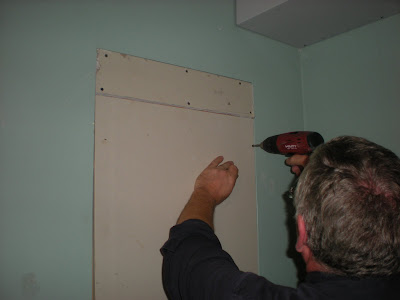 If it were a larger room, we might have decided to punch out the window for natural lighting. But the room is smallish and we need the wall space for shelving. Here is Hubby putting up some dry wall after he put some boards up in the space, and stuffed in some insulation. It is probably one of the most insulated bit of wall in the whole house! 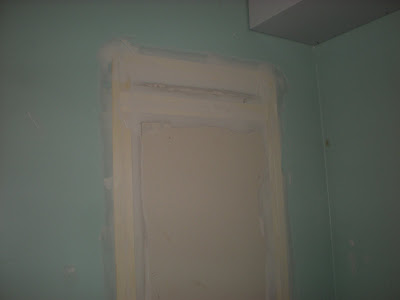 Now we are patiently waiting for the 'mud' to dry. Hubby is out in the work shop finding lengths of baseboard for the floor and bits of crown moulding or quarter-round for the ceiling. It is an exciting time!
Posted by Lori at 10:42 AM