Well, my apologies. It has been a very long time since I have put up a post. So many other distractions ... and the worst of it all is the fact that I don't have any pictures to prove it!
But I am finally back and have some shots of our completed Gingerbread Houses as promised a long time back. 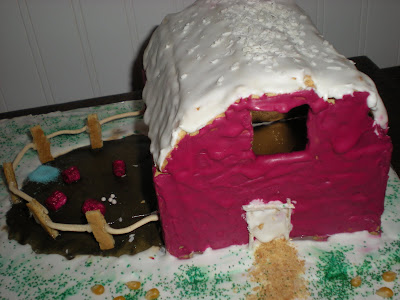 Here is a farm yard constructed by Johnnie-Girl. A traditional hip roof made without cardboard trusses is a feat in itself. The pig pen fence is made from posts of graham crackers and side boards of chow mein noodles. Notice the bright pink pigs and their white little piggies. Their water pond is made from a sprinkle of blue drink crystals. 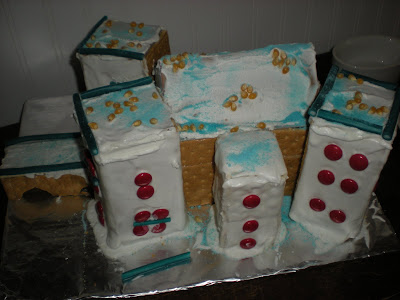 Dreamer's idea was based on Castle plans. Such fine work went into the structure. A turret was hoped for, but in the end fell over during construction! 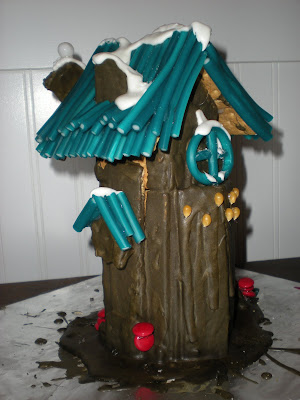 Genius stunned us all as he put together a replica of the Tetley Treehouse. It took some time of watching it unfold before our eyes before Dreamer guessed what it was. The picture does not do it justice however. It really does look like a tree house made of chocolate with snow drifts on the roof. 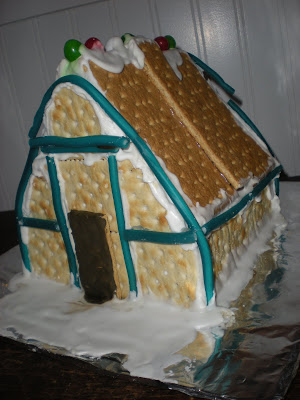 Hubby built what he calls a Bed and Breakfast. He used many different crackers, and a vast array of building supplies. It is solidly constructed and worth the three or so hours he put into it. 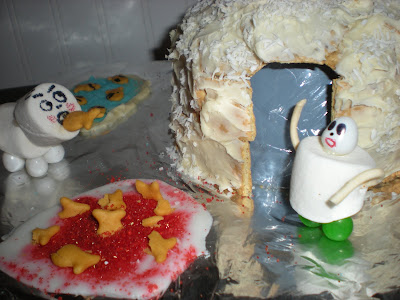 And finally I present to you my creation. It started with an inverted bowl. I used two different kinds of crackers and lots of glue and icing to make an igloo of sorts. Then I needed a marshmallow Eskimo with crazy chow mein noodle arms. He looks in a panic because he has discovered that a polar bear has been dipping into his Koi pond and eating his prize fish. Thus the 'blood bath and carnage' in the fore front. Hey anything is possible with a little imagination, glue, and STUFF.
~ * ~
Thus concludes our 2009 Christmas Gingerbread House Night. See you again next year.