For those blog readers south of the border ... you Americans ... losing your "N" may put a quizzical look upon your face.
Does she mean she's "losing her nut"? ... "Losing her noodle? Number? Nationality? Nubbin???
What is a nubbin anyway? ... A nubbin ... according to my pocket version of the Webster's Dictionary is "a small ear of corn". No, she hasn't lost that. Actually I can't even remember the last time we had corn on the cob. Maybe during the summer ...
Back to the subject at hand ...
In Canada new drivers are put through a series of tests (both written and practical) before they receive the privilege of driving a car on our Canadian roads. First is the "L" ... Some people call them Losers, but in fact "L" stands for Learner. A magnetic "L" is to be displayed on the back of the car when a Learner is driving. This warns the driver behind such a car to be patient and considerate of the newbie. 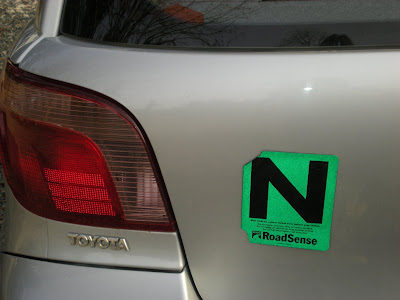 Next test ... or rather the passing of such a test ... results in the reward of an "N". I don't think that it stands for Nerd, but maybe something like New Driver. You have this for a year or so while you practice.
Then after the required time, you go for your final road test. A grueling 40 -45 minute road test. You don't know what they will throw at you ... Parallel parking? Reverse stall parking? Three point turn? Driving in a school zone?
Frightening to think about for a person who has driven for over 30 years and still drives around the block six times rather than parallel park.
But today, I am here to announce that our Johnnie-Girl has passed with flying colours. She is now an official member of the Canadian driving force. Her rear bumper ... that is her CAR'S rear bumper ... is now legally void of all lettering. Way to go.
~ * ~
For such a victory, I offered her a prize of some worth ... maybe a pleasant lunch with mom, a pretty new outfit, or even a simple ice cream cone from McDonald's.
She could not be tempted 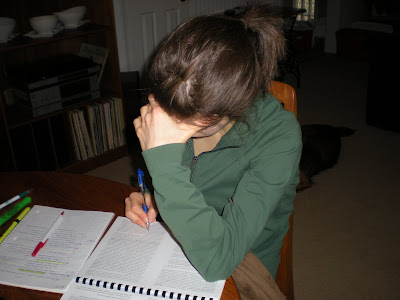 "Must get back to do homework" she announces.
My studious, scholarly, smarty-pants daughter opts for homework time.
What's a mom to do?
Congratulations Johnnie-Girl
Posted by Lori at 4:05 PM

Email ThisBlogThis!Share to TwitterShare to FacebookShare to Pinterest
Labels: Johnnie-Girl