Visit to the Temple 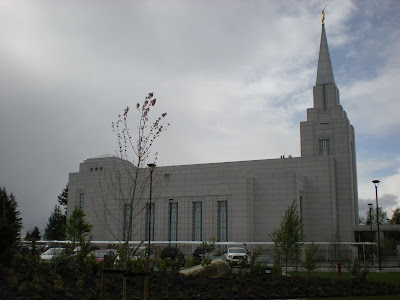 On Saturday our family went for a tour of the new VANCOUVER BRITISH COLUMBIA TEMPLE (Temple for the Church of Jesus Christ of Latter-Day Saints). The temple was open for public tours from April 9th through April 24th, 2010 and we caught a glimpse on the last day.

~ * ~
Now before I go any further, please keep in mind that we are Baptist and do not follow the teachings of Joseph Smith or the Church of Jesus Christ of Latter-Day Saints. We simply went for a curious 'visit' and do not wish to bash or condone the Mormons. 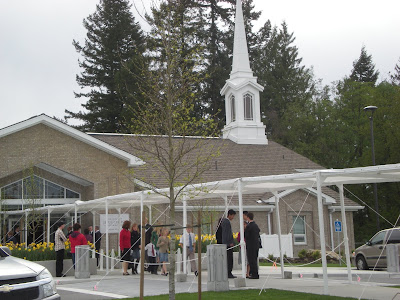 That being said, I must say that we had a very organized and informative tour of the new building. First was a short film on the other temples that have been built around the world, and then a woman took us around on a guided tour. She spoke generally of the different rooms and gave us short answers to our questions. 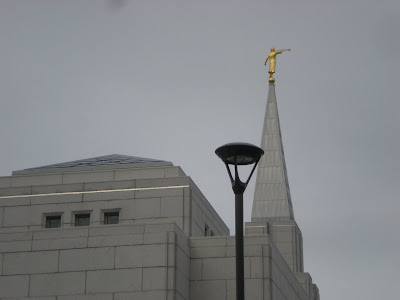 We had to put little booties on our shoes to protect the carpet as we (some thousands of viewers) walked through their temple. I have heard later that all carpets will be removed and replaced with new before their dedication service on May 2nd.

~ * ~
No cameras were allowed inside the temple, but to say that the interior was grand would do a great injustice to the Mormons. It was VERY VERY GRAND indeed. To the Mormons, the temple is the most sacred place on earth and therefore only the finest materials and craftsmanship was used.

Atop the temple a statue of the angel Moroni is perched. Above is a picture of the gilded angel on another temple. I did a little history on the angel ... 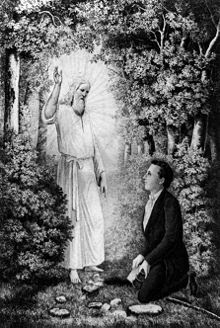 The Angel Moroni is an angel that Joseph Smith, Jr. said visited him on numerous occasions, beginning on September 21, 1823. The angel was the guardian of the golden plates, which Smith said were buried in a hill near his home in western New York, and which he said were the source material for the Book of Mormon. Moroni is an important figure in the theology of the Latter-Day movement and is featured prominently in Mormon architecture and art. Three witnesses besides Joseph Smith said they saw Moroni in 1829 visions, as did several other witnesses who each said they had their own vision.

~ * ~
Moroni is said to be the same person as a Book of Mormon prophet-warrior named Moroni, who was the last to write in the golden plates. The book says that Moroni buried them before he died after a great battle between two pre-Columbian civilizations. After he died, he was resurrected, became an angel, and was tasked with guarding the golden plates, and with eventually directing Joseph Smith to their location in the 1820s. According to Latter Day Saint movement theology, Moroni still has the plates and several other Book of Mormon artifacts in his possession.

Hey ... I just found a pretty good video on youtube (yah youtube) that I have embedded below for your viewing. I don't know how they got interior shots, but they did. Check out this 4 minute video.